Solutions > Solution for SAP > Internal scanning and archiving of received documents
The documents received are equipped with bar codes and batch scanned. During automatic routing, the scanned documents (objects) are assigned an ID while being stored in the IMiS/ARChive Server; data from the bar codes, metadata and the IDs of saved objects are stored in the SAP record. A connection is established between the archived object and the SAP record via the ArchiveLink interface. When users open a SAP document, they can view the scanned documents that are stored on the archive server, independent of the SAP system, by clicking on the attachment.
For the needs of internal scanning we equip incoming documents (invoices, signed field delivery notes, order forms, contracts, etc.) with bar codes before or after entering them into the SAP system. The documents are read using a bar code scanner and automatically entered into the SAP record along with potential static/dynamic metadata.
During the batch scanning of incoming documents, bar code recognition is executed and saved into an XML file, along with information about the object files of the scanned incoming documents (PDF, TIFF) and potential other metadata.
During the automatic routing of documents to the SAP system the incoming data are obtained from the XML file (bar codes, metadata, a link to the source objects). While being saved to the archive server, each object file (one- or multi-page document or file) is assigned a unique ID. The archived object ID and bar code data are entered into the SAP record via the standardized SAP transactional RFC function: ARCHIV_BARCODE_INSERT_RFC.
After establishing a connection between the waiting SAP record and the archived object, the document is accessible to users via the standardized ArchiveLink interface. IMiS/ARChive Server enables the saving of an unlimited number of objects, independent of the SAP databases. 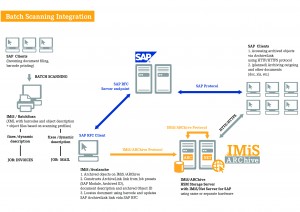 By opening a document the SAP user can, depending on the settings, select and view the scanned document (PDF, TIFF) using a menu function. When the attachment is clicked, SAP uses the ID to acquire the electronic document from the archive of IMiS/ARChive Server via the ArchiveLink interface and displays it in the integrated SAP viewer. 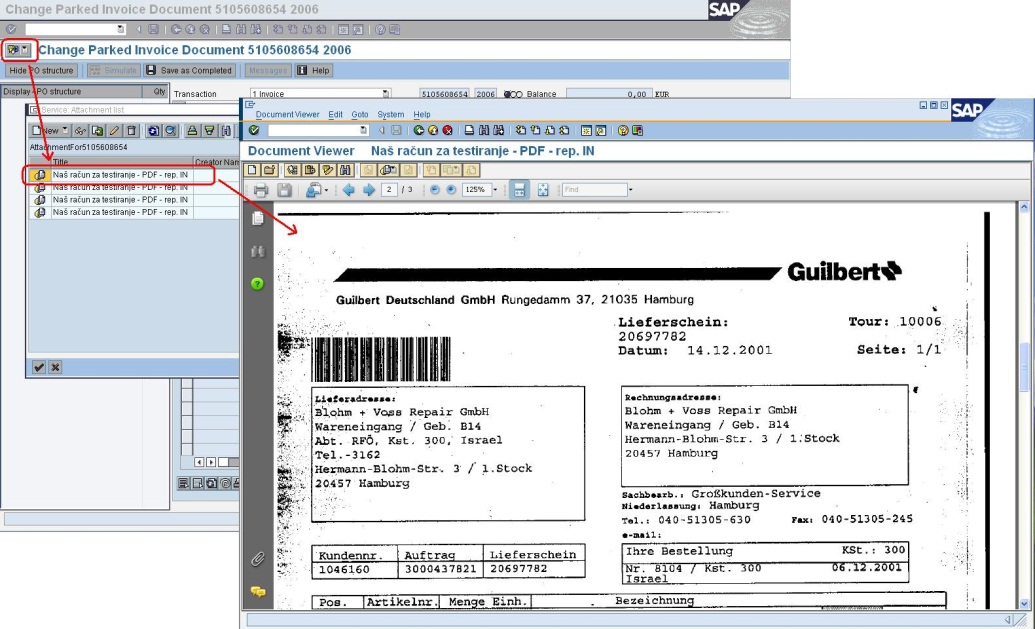